The strong did not survive…

Well, you live and you learn. And on Saturday, we learned that trying to visit seven cupcake shops in one day might have been trying to bite off more than we could chew. Literally.

I blame a number of factors for our demise. The first being the soup-like weather that had threatened rain earlier in the day and in a variety of forecasts. So I thought I would have the last laugh with this outfit: 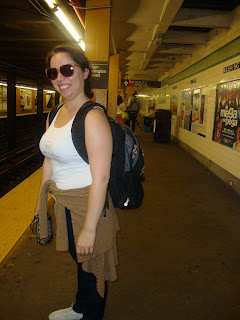 Turns out, as Nicole teased me for throughout the day, it just left me looking like my mother when she'd take us to movies when we were younger. She'd insist on us bringing our own popcorn and snacks, which she'd smuggle in in a huge, totally inconspicuous backpack, not unlike the one I have strapped to me in this picture.

In mine were my rain boots I'd brought along in case of the what I'd thought to be likely rain, that never ended up appearing.

Our first stop was the Brooklyn flea market to sample the Kumquat Cupcakery's minis.  It was there that the gravity of my clothing decisions truly set in. Surrounded by cuffed jeans, multi-colored ray-bans, and a variety of off the shoulder ensembles, I felt super uncool with my Swiss Gear backpack knocking over racks of vintage clothing and jewelry every time I turned. 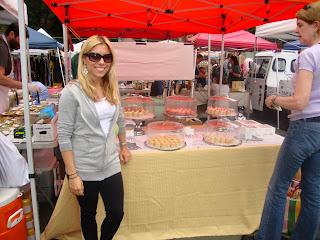 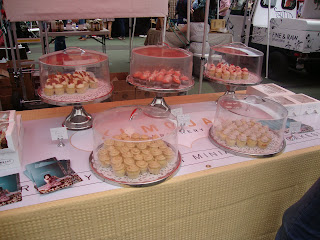 Kumquat owner Keavy Landreth was not there, but the gentleman who was manning her booth was happy to see we were on a cuppie tour and was the only one throughout the day to take notice and ask us where else we planned to stop.

"You're setting yourself up for disappointment," he said, when he learned it was our first stop.

And he was right.

These scrumptious little morsels were perfect, and our favorite of the 2010 tour. Her flavor choices and presentation are quite unique, a result of Landreth's BFA from Parsons no doubt.

I sampled a maple bacon and lemon lavender. Nicole had the strawberry and the maple bacon. Maple bacon is a cinnamon cake, topped with vanilla frosting and a thick cut of bacon. And it kicks ass. Literally. That perfect combo of salty and sweetness that many of us require.

It was then on to Sugar Sweet Sunshine on Rivington St., mainly because I'd been drawn by a certain pistachio cuppie ever since a certain Mr. Matthew Frappier brought me one for birthday way back in March. 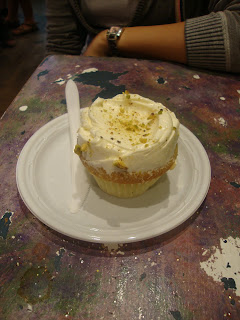 And it was on our way there that we realized our Cuppie Tour tanks' hours were certainly numbered. While stopped for a moment to gather our bearings, we were standing too close to the street and were splashed with sludge by a taxi whizzing by. Thankfully, only my jean leg got wet, but it got on Nicole's feet.

I know, that's nowhere near our tops, but it just made it even more apparent that we were going to eventually need a change of clothes.

The cuppie was good…and cheap! Only $1.50! Almost unheard of in this day and age of gourmet $3.00 confections. So SSS certainly gained points for that, along with their colorful and quirky decor. These Tim Burton-esque cabin doors had been hung along the walls. 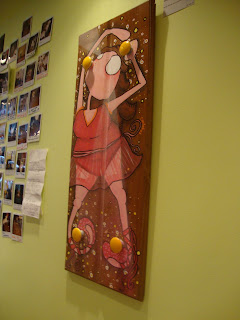 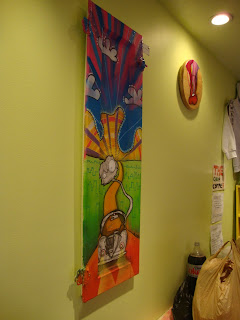 But the SSS signature "Moose" is extremely sweet and extremely buttery. Which, depending on your tastes, could be either an extremely good or extremely bad thing. Nicole, is not an icing fan, was of course, not a fan. I on the other hand, feel that frosting is the best part of any cupcake so I found it somewhere in-between extremely good and just good. The consistency of it however, I could live without.

Stop #3 was Butter Lane: an adorable little shop between 1st and Ave. A all the way downtown on 7th St. It was so warm and homey it just made me think of farm fresh eggs and buttermilk. And there is a method to that madness, as their focus is on pure ingredients like real vanilla beans, pure cocoa, and dark chocolate. 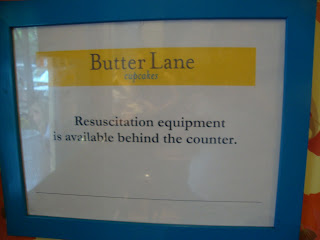 Another GENIOUS move, was posting an iPad to their chalk board. 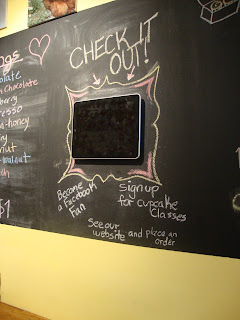 Not only are people jazzed to see and be able to use a real live one in person, but it also gives guests the opportunity to sign on to Facebook and become a fan while they wait in line. Keeps customers from getting frustrated from waiting on line. Smart move.

Another plus here is they offer custom ordering, as you can pick your cake flavor and frosting flavor to pair together. We went for a chocolate peanut butter. 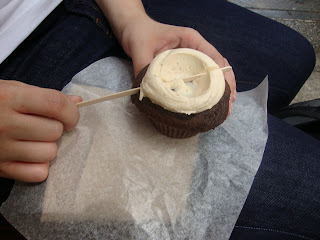 While very delicious and fresh, our only complaint was the cake practically crumbed in our hands.

After that, we made our way across town to Baked by Melissa.

I had visited their other location at 529 Broadway, which is only a street window. This one is an actual shop, that for some reason reminded me of an Apple store. The stark white and glass interior, dotted with a few flat screen tvs, gave it a sort of space-age vibe, that didn't really jive with her tie-dye signature brand logo. 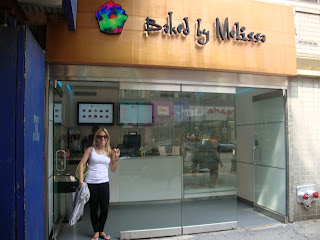 Nevertheless, probably my second favorite stop. Nicole had a red velvet and another chocolatey flavor that's escaping me right now. I had the tie-dye. All scrumptious and adorable. In case you didn't know, BoM's niche is tiny, quarter sized, $1 cuppie "bites," if you will, so that customers can sample as many as they like, as they are such tiny offerings. 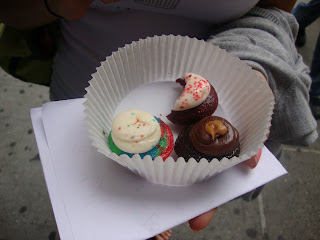 It was here that we started to reach our breaking point. The outfit and backpack was really starting to drag me down, so we decided to try to find the nearby Urban Outfitters and pick out something lighter to throw on for the last couple of stops.

We compiled a few choices, and went downstairs to find a huge line to get into the dressing rooms. The only thing I succeeded in with that round was making myself feel bad about my obviously not bathing suit ready body. I was ready to leave but Nicole pushed me to just try on a pair of shorts, so I could at least lose the long jeans. Well it was second-time's the charm and I finally found something to buy. We stopped in the Starbucks next door where we did the world's fastest quick change known to man in their bathroom.

So we were now rid of the clothes that were weighing us down, but I obviously still had the backpack from hell to contend with. It was at that point I started to lose it as I kept losing track of my sunglasses and my wallet in tandem as they seemed to hop on their own between the millions of compartments in that thing. AND there seemed to be no more available cabs in Manhattan as we'd waved the white flag on walking only/subway only policy of Cuppie Tour.

Well, finally one appeared and we arrived at Cupcake Stop in the Limelight Marketplace -- what was supposed to be our third to last stop, but ended up to be our final one. Thanks to my loving sister who realized I'd reached the point of no return and needed an excuse to opt out. We decided we'd take another Saturday to return to the Brooklyn flea -- where we hadn't nearly reached our shopping potential -- and pay a visit to Billy's and Buttercup after that.

Anyway, Limelight Marketplace is adorable, and a little surreal for those of us who'd actually been to it when it was a nightclub. Church --- nightclub --- marketplace. Who woulda thunk it!? 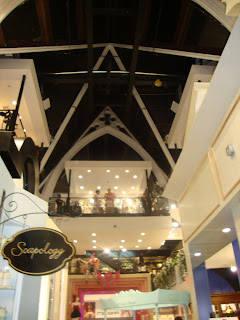 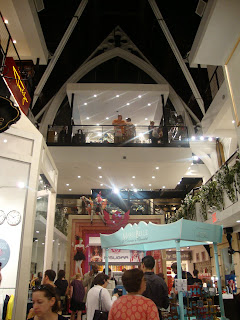 Cupcake Stop is the stationary version of their popular mobile trucks. We purchased a red velvet and a NUTELLA!!! (yes, I said Nutella) cuppie, which were both superb. Particularly the Nutella, which actually had hazelnuts baked into the cake. Mmmmmmmmm….. 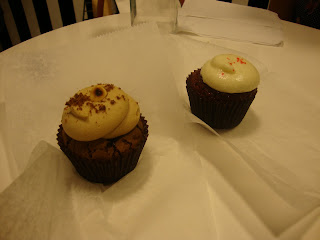 Don't get me wrong, I loved Cuppie Tour '10, had a fab time, and laughed my but off for much of it, which always seems to happen whenever I'm with sissy. And despite my catatonic state towards the end, I'd do it all again in a second. Minus the skinny jeans. And the camping backpack. 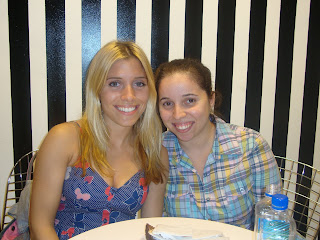 Most important lesson learned from Cuppie Tour '10: I NEED TO WORK OUT MORE OFTEN.

~AnnMarie
Posted by The Road to Sweetness at 8:09 PM