The Red, White, Blue, and Yummy

Our parents taught us never to show up to a party empty-handed. Can't say I always abide by that rule, but Flour & Sun Bakery in Pleasantville, New York, gave me a good excuse today to follow it.

I knew they were offering Memorial Day-themed cuppies this weekend and have been meaning to try this place out since it's so close to me, so I dragged Marc along to pick up a few on our way to a barbecue.

They had Caramel Apple, S'mores, Rainbow Cloud, and a few other regular varieties to choose from. We bought two Rainbow Cloud, two Red Velvet, and two S'mores. When I went into the kitchen to grab a shot of them, one had mysteriously disappeared. And the thief had knocked over one of the Rainbow Clouds in his haste. Hmmmmm.... 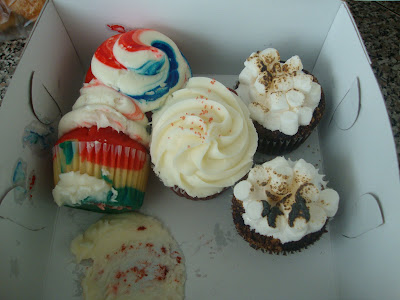 I helped myself to the disturbed Rainbow Cloud. Would that be considered rude, Mom? 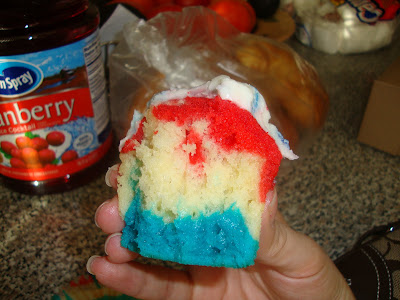 They had died the cake with red and blue food coloring on the inside too! And it was scrumptious!

I tried to coax Marc into going inside and stealing one of the S'mores ones, but he refused.

Anyway, hope everybody had a really nice Memorial Day weekend. We did... 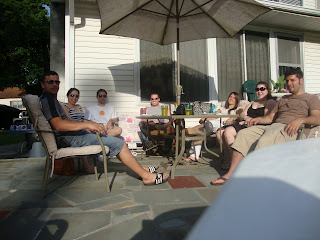 ~AnnMarie
Posted by The Road to Sweetness at 7:43 PM